I guess for this post, it's more of a "just talking" type of thing. A number of years ago, a friend of mine introduced me to the wonderful world of Destiny. Somehow, I missed the boat with Destiny (D1 as it's now known) when it was on the PS3. I suppose it was a mix of "why bother" when historically I've been opposed to MMOs or massively multiplayer online titles. I've always been a fan of Knights of the Old Republic (1 and 2) and of the Command and Conquer series (mostly Red Alert 2, and Yuri's Revenge).

At the time, I was dating someone and was fairly committed time wise to that endeavor, while not realizing that I needed to find a balance with friends as well. As with all things in life, proportions matter, and too much of something isn't necessarily a good thing.

So, it started with my old school PSN game tag (Mustang) as at the time I made a PSN account I had a 1967 Mustang Coupe. I know... bad choice for a gamer tag, as surely the Mustang would be gone and I'd be stuck with a name for something I no longer had. Enter: Jaden Katarn. A long time gamer tag, long ago generated from Jedi Knight Academy. Ironically, it's a mix of Jaden Solo, and Kyle Katarn. The name fits, as anymore we all have a digital persona that we use and it's not necessarily our "real life self".

Jaden, as my "clan" calls me (clans are the groups of players that work towards a collective goal of bettering each other in Destiny), started with D1 on the PS4. Warlock.... well, that is the main "character" that I run. A Warlock in Destiny is sort of what comes to mind for most folks. Someone that is scholarly and uses magic to accomplish their goals, while being able to handle their own; yet not full on warrior in nature.

Void Walker... Well, that is my preferred "light" subclass. Light in Destiny is what is granted to the player (magic per se) by the Traveler. A space being that came to Earth and brought about an age of enlightenment. Normally when the Traveler visits a world, there is no "direct gift of the light" to folks. This gift comes in the form of a "Ghost" (think mini airborne drone ai that is in many ways a multi tool device). The Ghosts were sent by the traveler to find the Guardians. Guardians are found, almost always as a heap of bones, and brought back to life via the Light and the Ghost. They have no knowledge of their past self, and may have been dead for many.... MANY years.

The signature Voidwalker Warlock uses for it's "super weapon" what's called a Nova Bomb. This is essentially a black hole that when it impacts a target explodes into a plume of Void energy damaging everything organic/"alive".

My Youtube channel has countless videos for gameplay from Destiny and Destiny 2, but I haven't released them as public yet... mostly out of respect for Bungie's terms as frankly I don't have a good way to edit videos and interlace audio into them to supersede the game play audio. The other reason is a pure lack of time to do so. I also don't see a need to "monetize" anything that I post either on here or YT. It's more of a creative outlet of sorts. Even the game play videos I have, most have my fireteams and I doing funny gags or pranks while playing D2/D1. A few short ones I have made public and you can take a look if you so desire. Youtube. 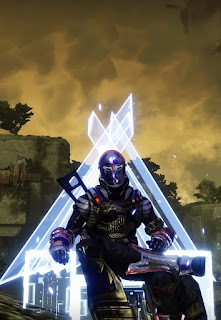 This is Jaden the Warlock, sitting on the throne of Aethon on Venus. It's what's called an emote, but I like to find creative ways to capture emotes in various places.
Until next time, head up Guardians.